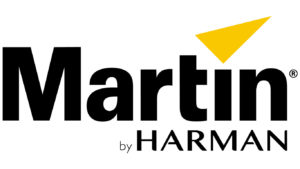 The history of Martin began in 1978 when founder Peter Johansen realized how to make a smoke generator from a coffee maker. The company was founded in Aarhus in 1986 and began producing primarily fog machines and a small selection of disco lights in 1987. Its name was acquired through cooperation with a French smoke machine company.

In 1994 the revenue exceeded 100 million Danish kroner and in 1995 the company was listed on the Copenhagen Stock Exchange raising a net value of 85.5 million Danish kroner. In 1999, Danish industrial firm Schouw & Co. purchased a 60 percent stake in the company. By 2001, Schouw had fully acquired Martin and delisted it from the stock exchange. Martin expanded production in 2002 through a new 11.500 square meter factory in Frederikshavn and a year later the company began outsourcing production to China at a factory in Zhuhai.

Martin enjoyed continued growth until 2008 but was hit hard by the financial crisis and reported a loss of more than 200 million Danish kroner in 2009 and had layoffs of 130 employees at their production sites in Frederikshavn.

Continued innovation especially within LED technology has helped the company through the crisis and resulted in several product awards. In 2010 the Confederation of Danish Industries awarded with its annual product price for the MAC 350 Entour LED based automated lighting fixture. The LED technology used in the product was a result of a three-year collaboration with Aalborg University. Furthermore, the MAC Aura luminaire and MAC Viper Profile won the PLASA award for innovation in 2011 and 2012 respectively. Martin started moving its production back to Denmark in the first half of 2012 their factory in Frederikshavn with 26 new employees. The move was made possible by a reduced labor demand in Martins new production lines.